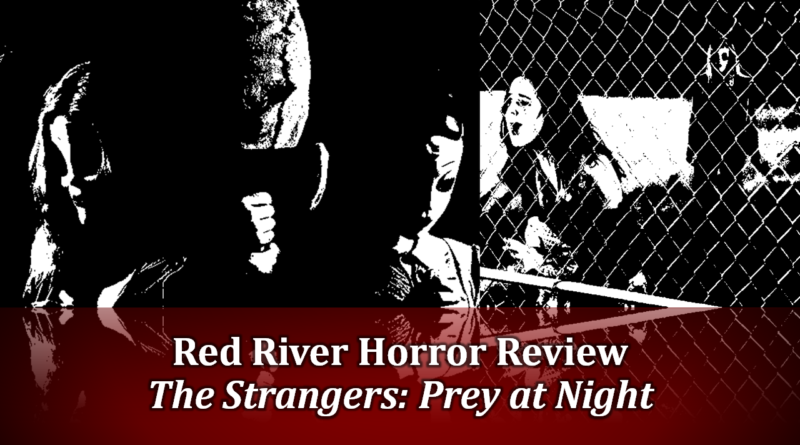 In 2008, zombies were running wild, shaky-cam was gaining popularity again and Saw still had a few bad sequels left in the tank.  Midway through that year, Bryan Bertino wrote and directed a horror film called The Strangers that was slow-paced, suspenseful and truly better than the other horror films at that time.  A decade has passed since those three masked predators terrorized an unsuspecting couple simply because they “were home,” and their sequel has finally arrived.

The Strangers: Prey at Night brings back Dollface (Emma Bellomy), Man in the Mask (Damian Maffei) and Pin-Up Girl (Lea Enslin).  This time they accrue a higher body count and enact more violence than in the original almost immediately.  Was this done to shake free of the major complaint from the first film, which was charged by some as being too slow?  Either way, it’s dark on a lonely bridge leading into a mobile home park and our antagonists are riding through blaring Kim Wilde’s 1982 hit “Kids in America.”  Songs like this from the same era will pop up a few more times throughout the film, all to enact that ‘80s nostalgia audiences have been craving for the past few years.

After the tone is set, the main characters are revealed.  The dad, Mike (Martin Henderson), is packing the family minivan as his wife Cindy (Christina Hendricks) and their daughter Kinsey (Bailee Madison) are visibly upset with one another inside the family home.  Kinsey is hostile toward Cindy for most of their time together on-screen, and it is eventually discovered the daughter has done something that forces the family to put her in an expensive boarding school, hours away from home.  In the last scenes set in the daytime, the three hop in the minivan, pickup the final member of the family Luke (Lewis Pullman), and hit the road.

When the family arrives at a mobile home park for an overnight stay with their aunt and uncle, they discover the entire park empty and in darkness, with a note in the main office that their uncle will see them in the morning.  They finally settle in at their quarters for the evening, when a young blonde woman knocks on the door and asks: “Is Tamara home?”  From here, the viewer knows it is going to be a long dreadful night.

For a short time, the audience gets to see Cindy and Mike together as a couple.  They are easy to root for, and it would be upsetting to see anything happen to them.  The kids, however, are a different story.  Luke and Kinsey’s first conversation alone on-screen is painful, and you can’t help but wonder if anyone else was hoping maybe one of the kids would be the first to go.  The actors’ chemistry did improve as the film pressed on, but their early scenes together took away some of the sympathy you might have had for them heading into the second act.

There are also moments when the ‘80s tunes get annoying, and you wish more of Adrian Johnston’s retro soundtrack could be heard accentuating some of the carnage.

That being said, the sequel does more right than it does wrong.

The mobile home park proves a worthy setting, with only one way in and out, and a lot of area in-between.  It gives the viewer a constant sense that The Strangers are watching, and in control of every situation.  The script was written by the original film’s scribe Bryan Bertino, along with Ben Ketai.  It is competently directed by Johannes Roberts, who brings the proper tone necessary to make a story like this scary.  Some long camera shots support three evil characters we remember being terrified of back in 2008…and they haven’t changed a bit.

The Strangers: Prey at Night is a proper sequel that delivers effective scares and offers some surprises, but loses some of the suspense from the original film.