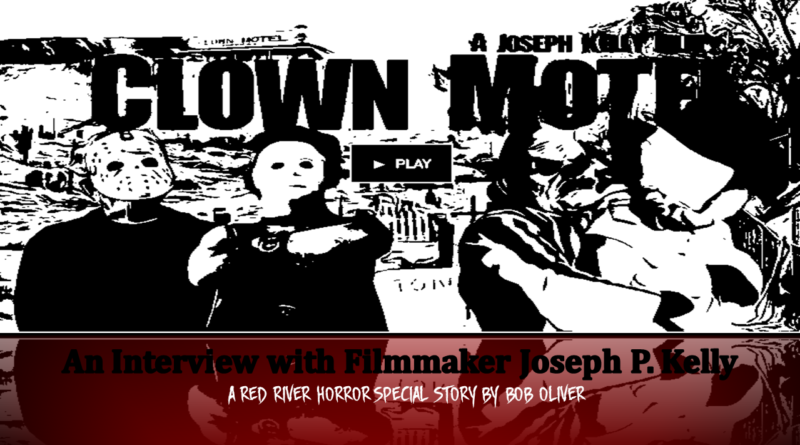 If you are attending a cocktail party and the conversation slows, there is one topic guaranteed to emit emotion, spark opinions and get the attendees quickly amped up. Simply bring up the topic of those loveable, hateable, balloon making and frightening “Clowns.”

Director Joseph P. Kelly has long had a love affair with Clowns, sparked at an early age.

“Everyone has an opinion of Clowns, they love them….hate them, fear them. Clowns evoke emotions,” said the Orange County, N.Y. native who now resides in California. “They fit so well into the horror genre, and, well, they just become a focal point in a story that attracts attention.”

These days Kelly is making final plans for the shooting of the full length feature film, Clown Motel – Spirits Arise, set for late spring in Tonopah, NV. It is centered around the world-famous Clown Motel that was the site for his 2017 acclaimed short: Clown Motel.

“We had so much fun doing the short, and the fans liked it. It was the result of a great crowd-funding effort, and had buzz,” said Kelly, who worked with MTV and Logo TV before his move to Hollywood. “We shot most of the film in Nevada, featuring the world’s scariest motel, the Clown Motel, in Tonopah.”

Clowns and horror films have been joined at the hip for decades. Tommy Lee Wallace’s TV mini-series rendition of Stephen King’s IT bedazzled audiences in 1990 and holds up today. Over the years dozens of films sparked emotion, from Clown House (1989), Killer Clowns from Outer Space (1988) to Clown (2015) and IT (2017).

It was after the release of Bloody Island that Kelly dreamed the idea that sparked the Clown Motel short.

“I was driving across the U.S. back to Cali and was ambitious to try something new. I wanted a break from the trilogy and was bouncing around numerous ideas,” said Kelly, who appeared in his early films and also numerous episodes of the TV series Pitch. “Stumbling upon the Clown Motel in Tonopah was a godsend. After spending a few days on site and learning the history of the town and the motel, I realized it was an awesome place and would make an outstanding venue with the right story.” 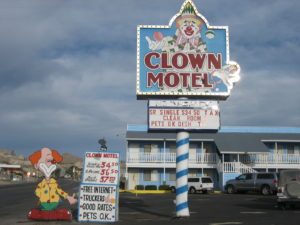 Clowns, from ceramic to full-sized replicas, are strewn throughout the motel. Add to that fact that many believe the motel is haunted – heck it’s located adjacent to a graveyard – doesn’t derail such thoughts. Once Kelly’s mind got a wandering…the idea began to germinate.

“Almost instantaneously I knew I had to capitalize on the area and the motel,” said the director. “The result was the Clown Motel short, which I believed would capture the imagination of those interested in horror films, and that interest hopefully generates buzz that gets folks to believe in us and invest in a full-length feature film. After the nice reviews and publicity, it became a no-brainer to work on a feature film.”

Clown Motel – Spirits Arise mixes horror and comic relief in a script penned by Kelly with some creative story development from Final Destination creator Jeffrey Reddick. It follows a group of ghosthunters from an old western haunted town who inadvertently meet up at the Clown Motel with several ladies who attended a bachelorette party in Las Vegas.   Kelly will be filming in Ultra High Definition and promises the film will have a realism derived from filmography and not CG technology. 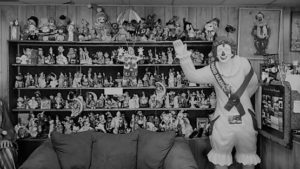 “We have high hopes for Clown Motel. Having horror icons like Tony Moran and Ari Lehman involved is a plus. We have upgraded out production to 6k video and added new beautiful locations. The story is one that horror fans will love,” explained the director. “We believe we can truly have a unique clown franchise here.”

Idea in place, Kelly thought about using his contacts with major studios before going the independent film route. “With the big houses films can be years in the making. We wanted to get a quality product out fast. This genre is alive and we believe we have a great idea, cast and will satisfy fans.”

Crowdsourcing is an effective means of funding, and Kelly has had success with www.kickstarter.com in the past. While he has secured funding from investors to get the Clowns running wild in pre-production, he’s using the site to secure funds to bring the dream to reality. Investors from a few bucks to thousands will make the film happen. There are great perks to reward a donation.

One exciting perk for Jason Voorhees fans is a Clown Motel style signed hockey mask autographed by Lehman. There are also numerous perks for those donating a few bucks to those who wish to be more involved with the project. Want to be an extra in the film? Maybe join the production team? There are numerous opportunities available here: Clown Motel – Spirits Arise Kickstarter Page.

The beauty of going the independent film route is in timing, control and delivery.

“Major studios want a whole lot of creative control, there are limitations to what you can do with the gore and story factor,” explains Kelly. “The good thing about working for ourselves is we keep creative control over how the final cut turns out. Of course, the bad thing is we need that extra financial help. Thus the partnership with Kickstarter, which also allows us to get horror fans involved in the process. Folks will be helping the Clowns Arise.”

Over the years, some great dialogue has been uttered in clown related films, such as “I’m your worst dream come true” and “I’m the eater of worlds….and children.” Kelly merely says of his script the film will offer similar dialogue.

Beware of the Clowns! You bet, especially considering the haunted shooting site, a superb cast and a horror driven film with a comedic bent.

Beware of the Clowns indeed.

Red River Horror will be providing updates and interviews with the cast and crew as the Kickstarter deadline approaches. View the campaign link here.