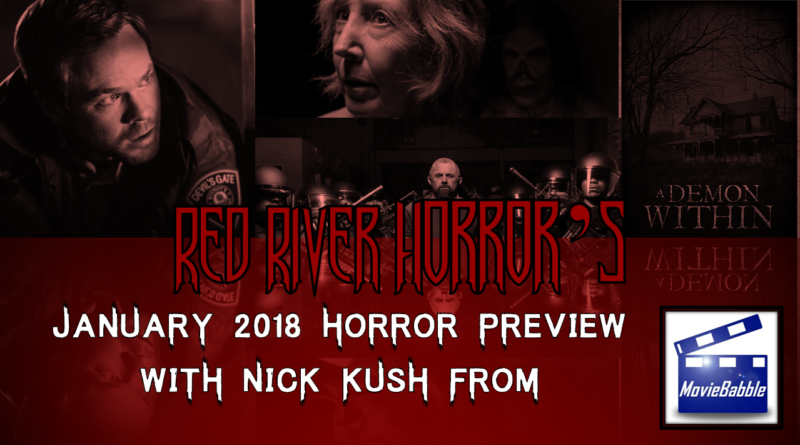 2018 is now upon us!  With the holiday season finished, the calender turns to January, a month that is always chock full of horror films.  Here’s a look into the January 2018 horror preview:

The first horror film of the year is the biggest new release of the entire January 2018 horror preview: Blumhouse’s Insidious: The Last Key.  The fourth film in the Insidious franchise once again stars Lin Shaye as Dr. Elise Rainier and follows another bout of paranormal disturbances.  However, this time, the evil forces attack her own family, making it a little more personal.  The film also includes a being that has keys for hands which is, well, pretty gross.

The other major film to release this week is Devil’s Gate, the story of an FBI agent that heads out to North Dakota to investigate the disappearance of a woman and her son.  However, when she arrives, she uncovers something pretty sinister in the basement of a secluded farm.

Inside tells the story of a partially deaf, recently widowed woman who moves into a new house alone, pregnant with a child past its due date.  Unfortunately, a predatory woman comes to her house in an attempt to snatch her child, leaving the woman to fend for her life.

If that story doesn’t excite you, look for A Demon Within.  A doctor must confront his own demons while attempting to save the life of a possessed teenager.  This demon is over a century old, returning after being exercised from another girl back in 1914.

The Midnight Man derives from another possessed board game (why do people continue to play board games in horror movies?).  After a young girl finds a board game in her attic, a force known as the Midnight Man comes to play, only he won’t be kind.

The other film set to release on the 19th is Netflix’s The Open House.  Netflix acquired the film back in November of 2017 as part of the streaming service’s quest to own as much content as possible.  The film itself seems pretty standard as a mother and son are harassed by evil forces upon entering their new home.

Primal Rage tells the story of a young couple’s journey through the Pacific Northwest.  Although the couple were looking for a lovely getaway, they encounter a terrible creature, referred to as “Oh-Mah” by Native Americans in the area.

Lastly, those who enjoy a solid gore fest should stay on the lookout for Death House.  The last film in the January 2018 horror preview entails two federal agents that must fight their way through waves of unsavory prisoners in a secret facility that goes levels deep into the Earth.  Horror fans have been waiting a very long time for this one, starring horror legends such as Kane Hodder, Dee Wallace, Barbara Crampton and Tony Todd.

As always, there are some films that premiered in 2017 that are available for purchase on digital and DVD: