Red River is excited to announce coverage from the 2017 Austin Revolution Film Festival (ARFF)!  Now in its sixth year, ARFF has been home to some exciting horror programming and networking in the past.  It is currently ranked number two on FilmFreeway.com’s “Top 100 Reviewed Festivals.”  After five years of dazzling indie film fans and filmmakers, this year’s fest is positioned to be the best yet.

Red River contributor, An Ounce of Blood reviewer and native Texan Michael Bird will be on the scene at ARFF.  He’ll be providing reviews and talking to some of the filmmakers in attendance.  You can follow along at the Red River Facebook page, or using #ARFF2017 on your favorite social site.

DoubleTree Austin Oakwood A B Screenings: The blood starts to splatter at 11:00 a.m. on Friday with screenings of Frazier Park Recut and Evil Rising.  Later that evening, catch the feature It Knows at 9:30 p.m., followed by the “Late Night Nutters” block at 11:30 p.m., featuring: Art of Obsession, I Love You So Much it’s Killing Them and Lurking Man (trailer).  As part of “Nutters” block, viewers get a bit of Canadian Whiskey. 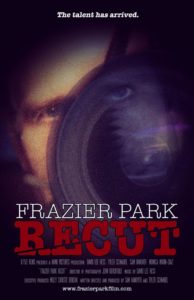 At 11:00 a.m., see a block of flicks written and produced by high school students aptly titled “Varsity Films.”  The notable horror entry is Room 701.  Beginning at 4:00 p.m. is the “Friday Thrillers,” with A Family Spirit, Burn the River Down and the world-premiere of Repercussion.  “Blood in Bat City” is the Friday finale for the University Hall screenings, featuring Prepare to Die, Curse of the Fur Beast and Brian Childs’ Hell of a Night.  Those watching the “Bat City” block get a touch of Texas Tequila. 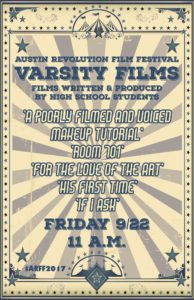 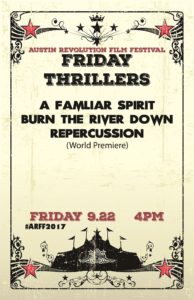 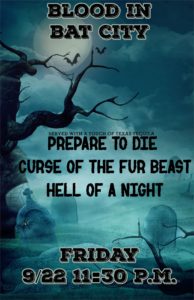 Hop in Christine and head to “A Bloody Night Out” at the drive-in.  The roster is chock-full of indie horror goodies beginning at 8 p.m. on Friday. Catch an encore screening from last year’s ARFF smah-hit Born Again, and the highly-anticipated The Babysitter Murders.

The Babysitter Murders (Trailer) from Ryan Spindell on Vimeo.

Don’t miss an exciting Friday filled with horror!  Purchase tickets for single events/screenings, a Friday Full Day Pass ($30) or a Combo Badge including both Friday and Saturday ($50).  Buy now at http://www.austinrevolution.com/p/buytickets.