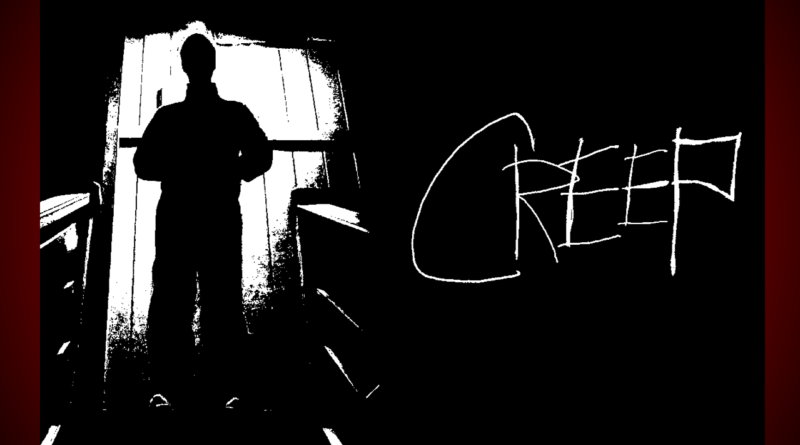 CREEP is a clever, unnerving thriller.

With CREEP 2 slated for an October 24, 2017 release, viewing the original more closely is a must.

CREEP is a 2014 found-footage horror/dark comedy marking the directorial debut of Patrick Brice.  The independent film was produced by Jason Blum (Paranormal Activity, Insidious) for Blumhouse Tilt.  Mark Duplass (The League, Safety Not Guaranteed) also produces and stars in the film opposite Brice.

By focusing on the characters, mood and tone as opposed to special effects, blood, and gore, CREEP sets the bar high for future films in the found-footage sub-genre.

Answering a Craigslist ad created by Josef (Mark Duplass), videographer Aaron (Patrick Brice) heads into the woods to meet his subject.  Josef explains he was diagnosed with terminal brain cancer and wants to film a video diary for his unborn son.  As Aaron begins filming, though, he starts to suspect that Josef is not exactly who he says he is.

Impressively, CREEP puts the viewer in the same position as Aaron. Not only do we see the film from Aaron’s point-of-view, but to some extent, we may be compelled to respond to Josef as Aaron does. In the same way Aaron wants to trust that Josef is troubled but inherently good, the audience is hopeful that Josef won’t ultimately cause any harm.

Duplass’ performance as Josef could be perceived as over-the-top, but his facial expressions and puzzling behavior are imperative to the disconcerting nature of the film.  Duplass stated that the film’s story was partially inspired by his “myriad of strange Craigslist experiences over the years.” This makes CREEP feel all too real, at times.  It’s safe to assume that at some point in our lives, we have known people who invade our personal space, overshare intimate details or just come off as a little creepy.  Unlike most slasher or supernatural horror films, CREEP humanizes its antagonist; we actually get to see and talk to him. We don’t trust him and he makes us uncomfortable, but like Aaron, now that we know Josef on some level, we don’t want to believe he is as sinister as we all suspect.

Indeed, the film derives most of its horror not from blood and gore, but instead from the uncomfortable interactions between the characters. In addition to the strange dialogue, long periods of silence during the characters’ conversations contribute to the general unease throughout the film. To that point, much of what is unseen, unsaid, and merely suggested, is what terrifies us most.

Brice intentionally uses these techniques to his advantage. In one scene in particular, Aaron pretends to turn off the camera when Josef says he needs to tell him a story and “get something off [his] chest.” The screen goes black and the audience is left with only audio and subtitles, leaving them wondering: What is Josef’s expression? What exactly is going on? What are they doing? Why can’t I see? The absence of any on-screen action forces the audience to focus on Josef’s words and tone of voice, heightening the tension of the scene. The viewer listens and reads every word—every disturbing detail—Josef relays in his unsettling story. His monotone and emotionless delivery adds yet another ominous layer to an already morbid scenario.

But what makes CREEP even smarter is its understanding of its intended audience. Chances are, the person watching this film is likely to be your typical “horror buff,” keenly aware of the genre’s conventions. But Brice seems aware of this.  Josef toys with Aaron; the film toys with the audience. If the viewer is anticipating a long, slow-burning scene followed immediately by a jump scare, the film may indulge them.  But it also sometimes withholds, thwarting the audience’s expectations. If the viewer is trying to figure out the film’s next move, the film is already two steps ahead. Kudos to Brice and Duplass, who co-wrote the film together.  This is quite the accomplishment considering the predictable nature of the film industry, particularly mainstream horror films.

CREEP is a clever, unnerving thriller. The film’s slow-burn approach keeps viewers squirming with discomfort while the jump scares keep them on the edge of their seats. This film is nearly a perfect entry in the found-footage sub-genre of horror thanks to exceptional writing and solid acting. Brice and Duplass  – with the help of Jason Blum – are well-positioned to create a successful trilogy.

Watch CREEP on your favorite streams: