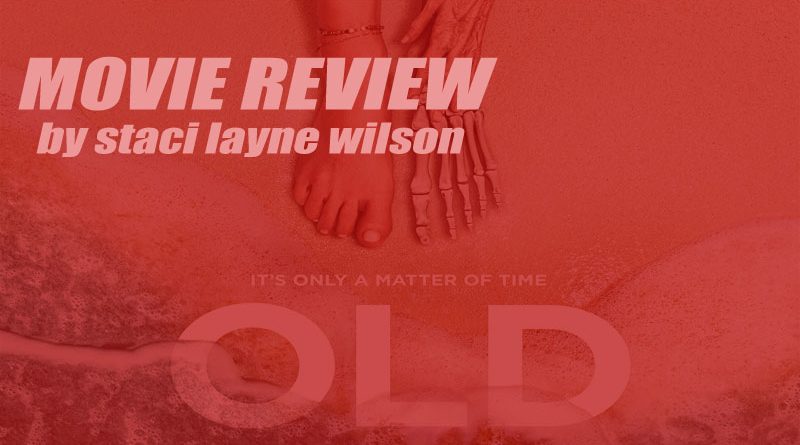 The key art for M. Night Shyamalan’s new film, Old, is worth the price of admission alone. In fact, maybe you should just buy the poster. Like most genre fans, I was intrigued and hooked early on by the eerie “body horror” and “psychological terror” concept—in fact, it reminded me a bit of Stephen King’s Thinner, which was funny, terrifying, and thought-provoking. In the case of Old, it’s about a Bermuda Triangle like island that traps, but doesn’t kill… at least, not right away—instead, it ages its prisoners at a greatly accelerated rate (about 50 years in 24 hours).

Writer-director Shyamalan’s first film, 1999’s supernatural thriller The Sixth Sense, launched and cemented his Hollywood career, garnering half a dozen Academy Award nominations including Best Picture, raked in over $600 million at the worldwide box office, and gave us one of the most surprising and memorable twists in the history of cinema. He grabbed our collective lapels by both hands and hasn’t really let go, despite some misfires like The Happening and Lady in the Water, to name a couple. But we always have hope with each new Shyamalan offering. Sadly, Old dashes those by taking an ingenious, fascinating premise and decimating it with cardboard cutout characters, dreadful dialogue, and by taking most of the horror offscreen as the camera swings around like a drunken sailor.

Based on the French graphic novel Sand Castle by Pierre Oscar Levy and Frederik Peeters, Old introduces us to a young family on a tropical vacation. It’s one final getaway to enjoy with their kids before insurance numbers-man Guy (Gael García Bernal) and his wife, museum curator Prisca (Vicky Krieps) dive into divorce. They haven’t told their 11-year-old daughter, Maddox (Alexa Swinton) and six-year-old son, Trent (Nolan River), the bad news just yet. The film opens on the foursome in a van, talking stiltedly about the future, growing up, and aging (expository much?).

Upon arriving at the Anamica Resort (Anamica is the name of a 1973 Hindi movie, by the way) in the secluded paradise, the family are welcomed with special tropical drinks and promises of breathtaking views. The solicitous resort manager (Gustav Hammersten) and his exotic assistant Madrid (Francesca Eastwood) are there to cater to their every need. They soon meet some of their fellow guests, including arrogant cardiothoracic doctor Charles (Rufus Sewell), his much younger, selfie-obsessed wife, Chrystal (Abbey Lee), their six-year-old daughter, Kara (Kyle Bailey), and his elderly mother, Agnes (Kathleen Chalfant), plus childless husband and wife, Jarin (Ken Leung) and Patricia (Nikki Amuka-Bird). Trent strikes up a fast friendship with the never-named resort manager’s innately creepy nephew, who’s about six years old, also.

This ethnically diverse group come from a variety of backgrounds, but there is one (as-yet) undisclosed thing that the adults all have in common. Shortly after arriving at the retreat, the impresario sends this group off on a day trip to an idyllic private beach he reserves for “certain guests.” Even though his nephew would like to join Trent, the child is not allowed to leave the main resort. The manager makes sure that they have plenty of food and a few extra changes of clothes… while one guest questions this, no one seems to think much of the extra cargo as they shamble, sheep-like, through a slot canyon (which is not unlike a chute that leads to a slaughterhouse) which opens to a gorgeous, secluded beach that’s hemmed in by large rock walls.

Upon arrival, Maddox is star-struck to see her favorite rapper, Midsize Sedan (Aaron Pierre), brooding alone by the water’s edge. She’s beside herself, but doesn’t approach him. He seems to be transfixed by the waves. Before long, the nude body of a beautiful young blonde woman is carried by the tide and ejected onto the shore—as it turns out, it’s Sedan’s companion, and immediately Charles believes the rapper is a murderer. They have no cellphones, and there seems to be a mysterious forcefield that prevents anyone from leaving. Worse yet, bizarre and terrifying things begin to happen—Charles’s aged mom ages out and dies, and the children start to grow up… literally. Maddox, Trent, and Kara are significantly larger and older—now played by Thomasin McKenzie, Alex Wolff, and Eliza Scanlen—but most of the changes are only physical, thanks to woefully underwritten roles that are accessorized with some of the clunkiest dialogue you’ll ever hear in an A-list film.

While Shyamalan did seem to think of everything in terms of possible scenarios (accelerated gestation, mental illness coming on like a juggernaut, twisted and broken bones healing far too quickly), the characters’ reactions don’t seem to be in line with their reality. Sometimes they freak out when somebody dies and other times they barely bat an eye; sometimes they have good ideas for dealing with their predicament and other times they make the dumbest decisions possible. All the while they spout awkward, unnatural dialogue, and stay paper-thin in terms of depth. They’re just cosmic cannon fodder.

I won’t give away the twist, but I must say—it almost made losing 108 minutes of my life worthwhile. Almost. The concept of a group of doomed souls bearing helpless witness their lives slip away is inherently terrifying, but the execution is hollow, making the result meaningless.